skip to main | skip to sidebar

Hi! My name is Abi and I would like to welcome you to The Thursday Group blog!

If you are looking for support and information about healing from sexual abuse, you have come to a good place. You might have come to this blog because someone you know has been sexually abused or you might be here because you’ve been sexually abused yourself. Either way, you could still have some uncomfortable, difficult, or scary feelings about what happened. It is wonderful that you are looking for more information and support. If you are like me, just thinking about the topic of sexual abuse can be stressful.You may want to take a few minutes right now and notice your breathing. If you are holding your breath, or taking quick shallow breaths, see if you can take a deep breath into your belly, letting your stomach go out as you breath in. When you breath out, just let the air flow out slowly and easily. Take another slow easy breath into your belly, and then let the air flow out slowly. If you want to, slowly take three or four more breaths, making your stomach expand like a balloon each time you breath in, and relax each time you breath out. Inside yourself, just say hello gently to your body and any feelings you are noticing. Look at some of the things that are around you wherever you are. Breathing, and noticing things around you like this, is something I learned about when I was in a support group with four other middle school girls in my town who had been sexually abused. I wrote The Thursday group to hopefully make things easier for others. This blog tells about the book (including messages from the other characters and sample chapters to read or listen to), and where you can order it. You will also find links to other good books and web sites. If you start to notice that your breathing becomes uneven or really fast, or your heart feels like it is pounding in your chest or you get dizzy or feel unreal; please, get up from the computer or iphone, look at the things that are around you, and go find or call that trusted adult. If you don’t have an adult in your life that you can talk to, please call a hotline number.

I am a fictional character, but I was created out of the very real feelings and experiences of the girls PeggyEllen and Kimber used to be, and the girls they have known.

We hope that this blog and book will help you heal.

The person who answers your call can help you figure out what to do and how to get help. If you call from a land line instead of a cell phone, the call will be free and will not show on a phone bill.

Author Q and A

Why did you choose this particular format, weaving together Abi’s story about her family and the girls in her therapeutic support group with the text boxes of suggestions and information for the readers?

PeggyEllen:  Because sexual trauma impacts all the senses, healing requires the participation of all the senses. Sexual abuse is difficult to read about for most of us. The story is the thread pulling readers into and through a difficult topic, inviting them to look at the process of healing from Abi’s friendly, and sometimes humorous point of view.  But we didn’t want readers to just rush through, ignoring their own feelings. The information boxes and the illustrations are designed to slow readers down and make it easier to stop, take breaks, and practice some of the suggestions for finding comfort and support. It takes time to process confusing and difficult feelings. The characters in the book experience various types of support: individual and group therapy, family members, friends, and community members. We hope that readers will imagine those types of support for themselves and look for those types of support in their own environments. 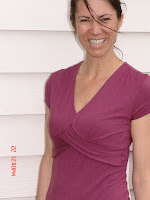 
Are any of the characters modeled on the authors or on people that you know?
PeggyEllen: Many of Abi’s confusing thoughts and feelings about child sexual abuse come from the creative worrying I did alone in my bedroom, growing up. The characters’ personalities are not based on any one person and the abusive events they experienced are realistic, but not real.  The terror that Danielle struggles with is similar to the terror I felt as a child.  The therapist, Carol, is named after a woman I worked with at the Women in Crisis abuse shelter in Fairbanks in the 1980s, Carol Demientieff.  She was not a therapist, however, but was the building manager and expeditor for the shelter.
Kimber: PeggyEllen developed the characters, and already had their stories mostly fashioned when I became a part of the project. None of the people that I have worked with, or their stories are a part of this book.

What can parents do to protect their children from sexual abuse?
Kimber:  We need to hear the evil, see the evil, and speak the evil. In other words, we must believe that sexual abuse happens, believe our children when they tell us about it, and do something about it. For too long, we have denied that abuse happens, or believed misinformation about abuse and how to stop it or heal from it, and we have allowed children and adults to suffer because of our fears of seeing what is really happening, and because of our strong need to believe that it isn’t happening. We absolutely must talk with our children about their bodies, and tell them that their private parts are special and sacred. They need to know how to say ‘no’ and how and who to tell if something bad or scary happens to them.  Most adults are afraid or nervous about talking with their children about sex and sexual abuse, so it’s important to learn fun and easy ways to do this. Darkness 2 Light (see www.Darkness2Light.org) has a curriculum that teaches adults that it is their job to protect children, rather than the child’s job to learn how to say no and tell someone.  We have many other suggestions in the book section titled, For Parents, Therapists, and other Adult Helpers.
PeggyEllen: Parents and other adults can take steps to help children be safer, such as asking about, supervising, and dropping in on, and making policies about one on one situations between children and adults or older children. Unfortunately, I don’t believe it is currently possible to keep all children totally safe from crimes such as sexual abuse and assault. Adults can certainly practice behaviors that will make it easier for children to ask for help if they are abused.  If you listen carefully and attentively and believe children in everyday things, they are more likely to trust that you will listen carefully and believe them when it’s as important and scary as disclosing sexual abuse. We can support organizations that work to treat and prevent child sexual abuse. We are pleased that the profits from our publisher, NEARI Press, go to support the New England Adolescent Research Institute’s work with at-risk adolescents.